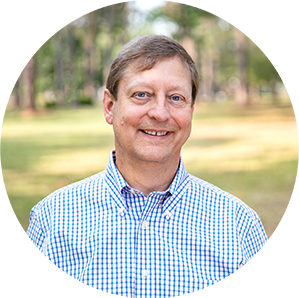 Sixteen years ago, W. Powell Jones saw challenges arise as businesses – particularly in the medical, legal and financial sectors – began moving to digital platforms for records management and faced greater compliance responsibility. In response to this need, he founded Secure Records Solutions in 2003. As President and Chief Secret Keeper, Powell brings extensive leadership experience and wisdom in client service, procurement, logistics, and revenue cycle management from his time at W.J. Powell. Powell has also been a leader in the industry trade organization PRISM International, now a part of i-SIGMA, for more than a decade.

After graduating from Washington & Lee University, Powell began his career with United Packing Company in Fresno, California. In 1983, he joined W.J. Powell Company. During this time, Powell was very involved in many industry associations and in 1994 received the Ross Kennedy Memorial Award for outstanding community and industry service. W.J. Powell sold to Performance Food Group in 1997, and Powell remained on as President of Powell/PFG until 1999.

A Thomasville native, Powell has held a variety of executive leadership roles in community and non-profit initiatives. He has been a Rotarian with Thomasville Rotary since 1986 and served as president and on the board of directors for six years. He is also a lifelong member of First Presbyterian Church, where he has been involved in many mission, leadership, and youth-oriented ministries. He and his wife, Caren, have been married for 33 years and have four children (Christopher, Mallory, Madison, Marshall).

I grew up in a service business. As a kid sweeping the floors and following my dad around, I learned that the client comes first. After my family business sold and I left the produce distribution industry, I began to explore other opportunities. The records management industry appealed to me in that it is a service industry , it suited my background in logistics and love of compliance, and I felt it was an industry that would provide a higher quality of life for our staff than the seven day a week food industry.

From day one, Secure Records Solutions was really focused on solving problems – thus the word “solutions” in our name. Today, we’re emphasizing that more than ever before. As technology has allowed and the needs of our clients have grown, we have diversified the services we offer to truly fit the unique needs of each client. The addition of my son Christopher has been integral to this transition.

We, as a company, operate on Judeo-Christian principles, which are reflected in our mission and core values. As much as we strive to make a positive impact on our clients’ lives, we also seek to benefit our team members, community and industry. Looking in the rearview, I can see how much God has been at work in the formation of this company through doors being opened at the right time.

When I began considering entering this industry, I visited 15 facilities in seven states to learn best practices from industry pioneers who graciously shared insights. During those visits, I learned things I wanted to apply and also things I didn’t want to apply. From the beginning, we set high standards and earned designations that have allowed us to be at the forefront of data protection despite changing times. My wife says that this business plays to my strengths because I’m very careful about protecting our personal information. Opening a business in a small town, I had to stand at the front door and assure friends and local professionals that I would safeguard whatever information was entrusted to us. No matter how much we grow, we will maintain that same philosophy of safeguarding information for our clients. Complete trust in SRS will always remain.

The son! I worked for my dad, who was my hero and mentor, from a very young age, and he was a very thoughtful manager. He gave my brother and me latitude to run with new ideas. I got some battle scars when experimenting with ideas to grow that business, but it taught me to experiment and try new things. In that company, we were mavericks in the food distribution business. And the same goes for SRS – we are truly mavericks within the information management industry.

I am extremely optimistic about the future. It’s a great blessing to be in a country where you have the freedom to be an entrepreneur. I came out of W.J. Powell – a family business with $50 million in sales and 142 great employees – and had the opportunity to take what I had been taught and start my own company. It was quite the gut check to start a new business and survive the early years. I am grateful to the earliest clients who took a chance with SRS, a brand new company. As an established business, we now do our best to support local entrepreneurs as much as we can.

Last year we celebrated 15 years. It was a great milestone, and we’ve truly hit our stride. We have been very blessed as a company with a terrific team of dedicated employees and many great organizations in this region and across the U.S. that we get to serve. I am confident that the best is yet to come.